skip to main | skip to sidebar

One of the negative consequences of giving subidies to people based on income is that you drive up the implicit marginal tax rate on income for those targeted for the subsidy. High marginal tax rates discourage people from working harder and making more money, which is bad for them and bad for the economy in general.

American society has become accustomed to a progressive income tax in which high income people face higher tax rates than low income people. Because of deductions, tax credits, and subsidies which phase out with income, however, there are many points along the marginal tax rate versus income curve in which low income people face implicit marginal tax rates well in excess of the rate for the highest income tax bracket (currently 35%, going up to 39.6% in 2011).

For example, the earned income tax credit appears to have a phase out which creates an excess marginal tax rate of 21.06%. Combined with a regular income tax rate of 10%, a social security tax rate on wages of 6.20%, and a medicare tax rate on wages of 1.45% (I've even neglected the employer portion of FICA taxes that most economists would claim is paid implicitly by the worker), the total marginal tax rate for a very poor worker with two or more children exceeds the current rate for the highest bracket. I haven't looked into this carefully yet, but rumor has it that there are pretty common situations where a taxpayer faces marginal tax rates approaching 100%.

The new health care reform bill will provide health care insurance subsidies for those making less than 400% of the federal poverty line (which in 2009 was $22,050 per year for a family of four). The subsidies phase out mostly linearly, but with jumps at certain thresholds. I decided to calculate the implicit marginal tax rate of the health care insurance subsidy for a family of four, based on the 2009 federal poverty line. The graph is below: 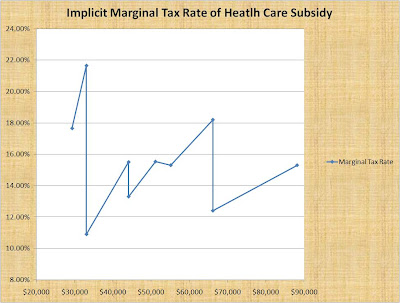 What isn't shown in the graph is that the marginal tax rate for a family with income at 400% of the federal poverty line ($88,200 in 2009) is infinity. The subsidy completely goes away, and the difference between the cost of the benchmark health insurance plan and $8,379 (i.e. 9.5% of that family's income) is lost to that family if it makes even $1 extra. For my example and my graph, I have assumed of course that the benchmark health insurance plan for a family of four is in excess of $8,379, but I think I'm pretty safe there. Even today such an insurance plan probably costs more than $12K per year, and once Obamacare kicks in, that plan will probably cost 25% higher.

Anyway, these implicit marginal tax rates (fluctuating between 10.90% and 21.65% before exploding to infinity) are due solely to the health care insurance subsidies embedded in Obamacare. Families at the relevant income levels will be facing these marginal tax rates in addition to the ones that they're already familiar with.
Posted by ESM at 6:12 PM 8 comments: Links to this post

That's a remarkable increase and surely will be priced into the stock market at some point.

When one considers that US corporations already pay a 35% income tax, then a corporation which distributes its profits to shareholders via dividends will essentially be returning only (1-35%)*(1-43.4%) = 36.8% of its before-tax profits to the owners of the company after they've paid their income tax.

This surely must rank as one of the highest marginal tax rates on corporate income in the developed world. In fact, I'm pretty sure of it. Of OECD member countries only Denmark and France had higher effective corporate income taxes in 2009 (by 9.2% for Denmark and 6.3% for France), and the new rates in 2011 will put the United States in first place by a wide margin for profits distributed through dividends.
Posted by ESM at 1:08 PM 1 comment: Links to this post

There is an interesting game theoretic aspect to the current state of health care reform legislation (aka Obamacare). The Democrats need to pass the Senate bill in the House first, and only then can they fix the provisions currently unacceptable to the House with a followup bill that needs to pass both the Senate and the House. The controversy about reconciliation concerns using reconciliation to pass the followup bill in the Senate with 50 votes (our clownish vice-president would cast the tie-breaking vote, so 50 is all the Democrats need).

Many consider this use of reconciliation to be illegitimate, since it is facilitating the passage of sweeping legislation that doesn't even come close to meeting the eligibility requirements for circumventing the Senate filibuster. I don't agree on that specific point. Although it's a close call, using reconciliation to fix budget-related aspects of the bill in order to attract more votes in the House strikes me as reasonable. After all, the House still has to pass the Senate bill without any guarantees whatsoever. If Democrats tried to do it the other way around -- pass a reconciliation bill first, then I think that would be an egregious attempt at circumvention of the filibuster.

That being said, there is a strong argument that the bill is illegitimate as it stands. There is no doubt that it wouldn't have received 60 votes in the Senate if not for the presence of outrageous provisions used to bribe individual senators. Everybody is rebelling against those provisions now and wants them stripped out of the bill, even some of the senators that negotiated them in the first place, but the bill would not have passed the Senate without them.

For the game theory aspect of Obamacare, I'm going to assume that the Republicans actually have a way of severely impeding a reconcilation bill. I believe this is true. One way is to raise points of order repeatedly against reconciliation bill provisions for violating the Byrd rule. A second is to offer hundreds of amendments to the bill after time for debate has elapsed. Each of these amendments takes a minimum of 15 minutes to vote on, and so it is possible to kill an entire legislative day with 50 or 60 relevant amendments. Do this for long enough, and the Senate grinds to a halt.

Given that the Republicans might actually have it in their power to obstruct a reconciliation bill, the Republican dilemma is as follows:

2) some of the most important amendments that skeptical House Dems want to see are provisions that Republicans and the general public support (e.g. stronger restrictions on abortion funding, elimination of the Cornhusker Kickback, Louisiana Purchase, and the Florida Flim-Flam and weakening of the mandate to buy insurance);

3) if enough House Dems think that the Republicans will be forced to allow those amendments to pass, the Senate bill will pass the House.

The Republicans' quandary is similar to that of the United States during the cold war. How did the United States convince the Soviet Union that it would respond to a ground invasion of Western Europe with a nuclear escalation? Once the invasion is underway after all, the logical decision for the US is not to escalate.

The solution of course is to implement elaborate protocols to convince the other side of the credibility of the threat of retaliation. The United States developed a whole strategy built around nuclear retaliation in Europe.

It kept a few hundred thousand troops on the front lines, which was a force way too small to stop an invasion, but large enough to create a terrible bloodbath for the US if the Soviet Union invaded. The nuclear retaliation strategy was developed in detail at conferences, in military schools, and in the academic literature. And it was widely publicized and discussed by high officials in the US and in Europe, including by US presidents.

All of this was effective in preparing the public for the inevitability of nuclear retaliation and for putting the president of the US on autopilot for following the protocol. As a consequence, the threat was credible to the Soviet Union and functioned effectively as deterrence.

The Senate Republicans can play this game correctly by laying out their strategy of obstruction in advance and publicizing it widely. They need to publicize the points of order they will raise, as well as the hundreds of amendments they'll have prepared to delay a vote on the reconciliation bill. It strikes me as easy to propose thousands of non-frivolous amendments, by the way. All you have to do is propose reducing spending on items in this year's or next year's budget, one at a time.
Posted by ESM at 7:57 AM 2 comments: Links to this post